First Week of Reviews of “In Hoffa’s Shadow”

I could not have asked for a better set of reviews for In Hoffa’s Shadow in the first week. 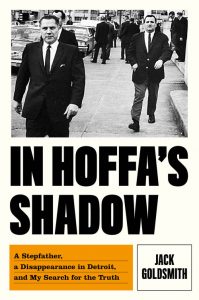 Chris Nashawaty, New York Times (9-27-19): “Jack Goldsmith’s gripping hybrid of personal memoir and forensic procedural lands with the force of a sucker punch. …  [O]ver the course of ‘In Hoffa’s Shadow,’ Goldsmith’s quest becomes less about solving a mystery than a meditation on the complicated and occasionally bittersweet love between fathers and sons. It turns out that sometimes the search for truth can be its own reward.”

Seth Stern, Christian Science Monitor (9-24-19): “Goldsmith has produced a wonderful book about the complicated relationship between a deeply flawed stepfather and the adopted son he loved deeply and forgave unconditionally for casting him aside.”

Jennifer Szalai, New York Times (9-24-19)― “The book’s pacing is steady and unrelenting, as Goldsmith toggles between his own careful narrative voice and Chuckie’s off-the-cuff wiseguy vernacular.  … “In Hoffa’s Shadow” covers a lot of ground, but I was most struck by the frankness with which a buttoned-up Goldsmith writes about his stepfather.”

Hugh Hewitt, Washington Post (9-23-19)―”[T]he unlikeliest riveting read of the year … [R]eaders from all backgrounds and across entire political and economic spectra won’t be able to put it down.”